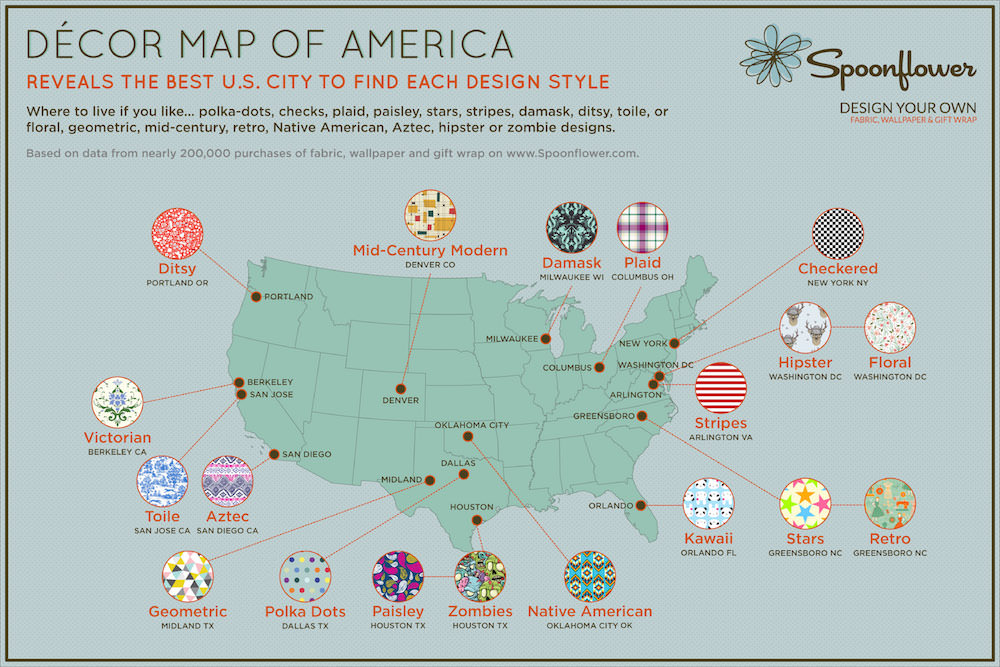 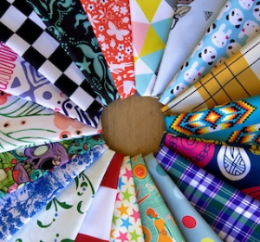 DURHAM, NC, Nov 16 – A ground-breaking new "Decor map of America" pinpoints the best U.S. city to live for fans of each of 19 different design styles – from paisley to polka-dots, Victorian to mid-century modern, and Aztec to Native American.

It reflects data from nearly 200,000 purchases on the website Spoonflower (www.spoonflower.com), which lets customers design, print and sell their own fabric, wallpaper and gift-wrap.

"Our map provides a unique insight into the decor tastes of America and the psyche of its cities," says Stephen Fraser, co-founder of Spoonflower. "It also pioneers an entire new field of what we’re calling ‘decor geography’."

Spoonflower designates as the "capital" of each design style the city where a higher share of customers than anywhere else have purchased that style.

The findings of its study confirm some expectations, while confounding others.

New York, for example, is capital of checkered designs – as in the black and white checks that adorned New York's checker taxi-cabs for so long that they seem to have pierced the city’s subconscious.

"It's probably no surprise that Arlington, home to the national cemetery and major military memorials, is the top town for stripes", says Fraser.

It likewise makes sense that San Diego, on the doorstep of Mexico, ranks top for Aztec designs, while Native American decor is most popular in Oklahoma City, capital of a state where some 40 Native American tribes have their headquarters.

Houston too seems a fitting capital of paisley – as in the paisley kerchiefs long the neckwear of choice for the well-dressed cowboy.

The university town of Berkeley, California was famed half a century ago as the capital of hippiedom but turns out nowadays to be the U.S. capital of Victorian decor. This may be because rising house prices have attracted a more upscale and – whisper – conservative crowd. But it may also be due to the many Victorian homes in town and a simple desire for decor in keeping.

Portland is Spoonflower’s capital of ditsy designs, which, like the good folks of Portland, express the belief that small is beautiful. Denver, the city where Midwestern cheer meets Californian chill, is the top town for mid-century modern. Orlando, home of Disney World, makes an appropriate capital of kawaii, the Japanese style of cutesy cartoons, which might be considered Japan’s answer to Disney.

But who knew that Washington DC, the nation’s capital, would also turn out to be its capital of hipsters; or, at least, the city where decor with hipster motifs would sell best?

Yet it does by some margin, leaving the likes of Austin, Seattle and San Francisco in its trail, while Brooklyn, historic center of the hipster universe, trails all of them. "It seems likely that hipsters in Brooklyn are simply too hip to buy decor labeled as hipster," observes Fraser.

Washington, however, also ranks top for floral designs – making it a town divided between hipster shades and floral drapes.

It is also one of just three cities to top the national rankings in two different categories. The others are Greensboro, North Carolina, top for both stars and for retro designs, and Houston, the top town for both paisley and zombie decor.

"Hipster" and "zombie" are not traditional decor styles in the same sense as, say, damask, paisley or plaid, but they qualify for Spoonflower’s map as niche decor categories which are scarcely available elsewhere. Spoonflower is, for example, the world’s leading source of zombie fabric and wallpaper designs, with over 400 unique examples on offer.

"The title of ‘Zombie Capital of America’ is as big as it gets in the world of zombie decor", says Fraser. Houston alone can now claim it, on the grounds that its residents are more likely to buy wallpaper and fabric with zombie motifs than are those in any other city in the U.S., if not the world. "Like I say – as big as it gets."


METHODOLOGY: Spoonflower crunched the data from nearly 200,000 recent purchases by its customers of custom fabric, wallpaper and gift-wrap – and organized them under categories that each represented one design style. In order to avoid the biggest cities topping the the rankings for each style simply due to having more people, Spoonflower weighted the scores by calculating the number of customers for a particular in any given city by the total number of Spoonflower customers in that city. That gave a better measure of the popularity for each style in any city and identified the city where each style was most popular.

ABOUT SPOONFLOWER: Spoonflower is a website that allows anyone to upload their own designs to print on fabric, wallpaper or gift-wrap. Making things with Spoonflower is also the subject of a new title from Abrams Books titled "The Spoonflower Handbook: A DIY Guide to Designing Fabric, Wallpaper & Gift Wrap with 30+ Projects."

We use cookies to enable and enhance your site experience. By continuing, you agree to this use. Learn more